I had a wonderful time last night hearing Michele Filgate in conversation with Liberty Hardy about Michele’s new anthology What My Mother And I Don’t Talk About: Fifteen Writers Break the Silence, one of the most highly-anticipated books out this spring. The anthology includes work by Alexander Chee, Carmen Maria Machado, Melissa Febos, Kiese Laymon, Sari Botton, and Leslie Jamison, among others. The event was sponsored by Riverrun Bookstore of Portsmouth, where Michele used to work.

What My Mother And I Don’t Talk About started with an essay that Michele had tried to write for years about her abusive stepfather, until she realized that what she really needed to write about was her mother and her response to it.  That essay was published by Longreads in the fall of 2017 just as the #MeToo movement was gaining in strength, and it went viral. It turned out a lot of other writers also had a lot to say about their relationships with their mothers across a range of subjects, and the anthology was born.

Several months earlier, I had taken an online freelance writing class with Michele and one of the pieces I worked on in that class ended up being published at Hazlitt. Many of those of us in that group have stayed in touch via social media and met in person at AWP/Tampa last year. Here are some pics from last night: 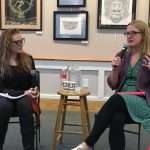 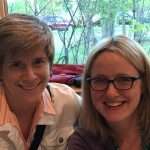 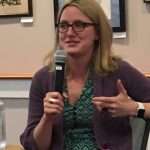